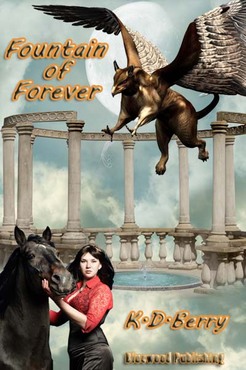 Halleday had a pretty good scam running at the Fountain of Forever. Peddling the promise of youth to the credulous, the old and the desperate. The thing is, ever since he took on the enchanting Persephone as his assistant, the Fountain actually seems to be working, and he doesn't know why.

Time is on the move. Eddies and ripples in the timestream. Little bits of time shifting about of their own accord. It's up to temporal agent, Merrivel, to find out why. And then do something about it. But he has his own secret agenda. It's personal, and strictly against the rules.

Time is what Vilnius Baccarat needs. Desperately. His thirty years is up, and the price for his granted wish is now due. His fate is bounding up to overtake him like an enthusiastic bloodhound. He knows Storm is on his trail to collect the debt, and she won't give up. Ever. Can the Fountain of Forever save him before his time runs out?

If time could be spun, measured and cut, who should decide the length of the thread? Persephone has her own ideas about that. And it's about time.

What people are saying about Fountain of Forever

It's another hilarious past-paced tale from this award-winning writing duo - Lee Murray, author of A Dash of Reality